…and we unlocked 72 dB/Oct filters in freeware version! Check them out (they don’t sound as sharp as they look)

(a lot of boring text follows)

END_OF_DOCUMENT_TOKEN_TO_BE_REPLACED

Well, TDR Nova 1.0.5 update was out some time ago and now it seems the plugin is somehow working. The CPU usage is higher than average but we slowly dealing with it. UI is CPU heavy too due to software rendering used but we’ll fix it in some further update.

But let’s talk a bit about differences between TDR Nova and original Nova 67P:

END_OF_DOCUMENT_TOKEN_TO_BE_REPLACED

Now let’s go into the details.

END_OF_DOCUMENT_TOKEN_TO_BE_REPLACED

A couple of words about top 3 effects.

I had pretty interesting concept of a mixture of parallel equalization and splitband compression in one plugin but the approach was just of pure interest without any realistic vision of final plugin. The plugin was created for KVR Audio Developer Challenge 2014 in a great hurry and under very stressful conditions. Some parts were created in less than a hour and the most complex part of this project was to bring all components together and quickly create some kind of acceptable GUI. So we have what we have. The sound of the plugin is good, the plugin is really helpful in many complex mixing/mastering situations but GUI usability is far from ideal. That’s why we’re going to re-release this plugin with enhanced workflow and with some new features under Tokyo Dawn Labs. Also I’m very happy with my 2nd place on KVR DC14 too! And also thanks to Lesha for the current skin. 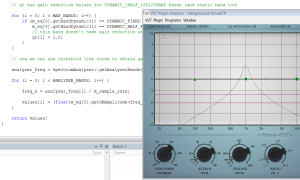 I can’t say, I did a lot for this plugin. In my opinion the most remarkable contribution from me was complete removal of feedback path (lol) and maybe a little help to RMS part (which led to high CPU usage we finally have). But in GE version I had a great pleasure to implement FDR, variable slope HPF and equal loudness stuff. Also our conversation with Fabien about the name of this plugin was very fun!

It was really joyful experience to collaborate with Herbert on this project and to program DSP code for it and also to add such nice things as EQ saturation, Soviet mode and auto gain stuff. For GE version I’m still not 100% sure (about 75% actually) for the decision to add tilt filter instead of the 4th band but finally we have unique linear shape tilt, great workflow I’m happy with and also with such small additions as Japanese mode, a couple more saturation types and new HPF/LPF stuff! I like standard freeware version due its extreme simplicity and I use it a lot (although I have GE version too). The CPU usage is higher than desired but we tried to reduce it in recent 1.1.0 update.

See you next year!

Get updated version from <Nova-67P page>